Stiftelsen 3,14 in collaboration with the Bergen Academy of Art and Design 18 January, 2014 curated by Brandon LaBelle and Soledad Garcia Saavedra 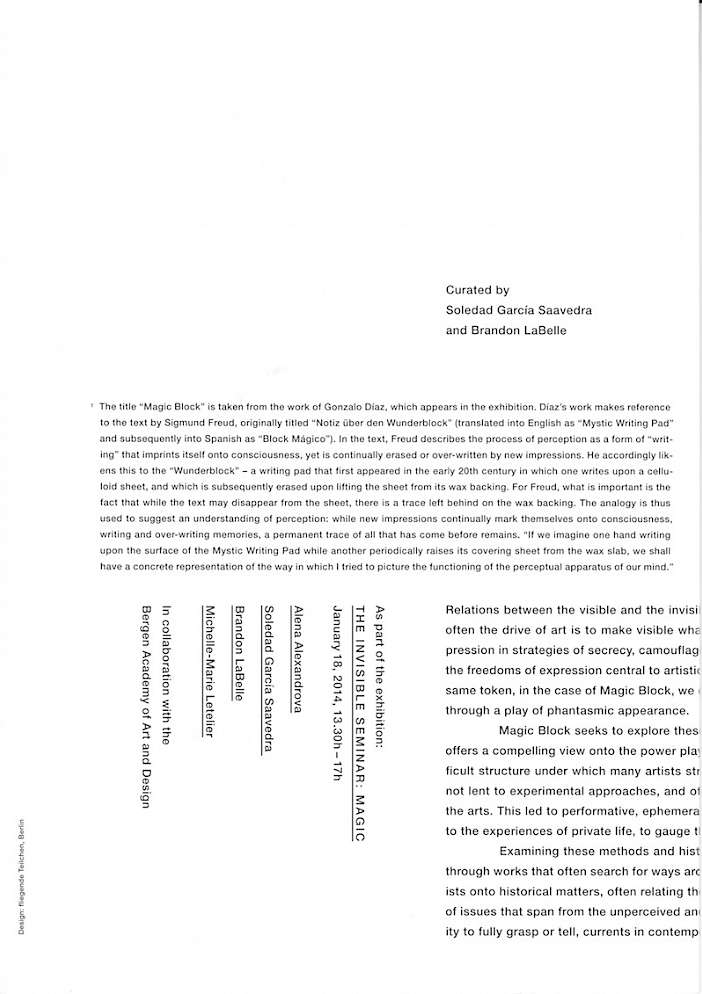 Invisibility is a state, a figure, and an aspect of images. It offers a visual experience of seeing that “I cannot see.” The visibility of visual objects and images (fragments, historical objects, things, tools, artworks, films, projections etc.) depends upon, and is produced by something that is designed to be overlooked: the frame, the architecture of the archive, the catalogue, the apparatus, the fourth wall, the plinth, the musical score and so on. When rendered visible these devices, what may be called infrastructures, define a mode of self-reflexivity with a broad spectrum of effects. But it also offers an intriguing mode of visibility, a negative space of sorts, which being visible itself frustrates our capacity of saying “I see” of identifying, or making an interpretation.

Invisibility is also a figure of resistance in a broader sense; becoming invisible, disappearing, merging with the background. Becoming one with the place in the act of mimicry implies the erosion of the distinction between figure and ground, the subject and its environment. As such in a philosophical sense it can be understood as a gesture of resistance to the totalising closure of the figure, of the concept, and also of the self-certain subject. Rendering things visible is associated with power, assignation of identity, in other words of creating a figure. Invisibility can be understood as a double motif – both associated with the invisibility of power mechanisms, and invisibility as a space of resistance. What happens if we juxtapose different modes of invisibility: the visibility of a negative space of the archive that has lost the things it holds; or the imperceptible, when something stares at us and evades our gaze; or the event, if you want unexpected, also miraculous event whose cause remains unseen or invisible.