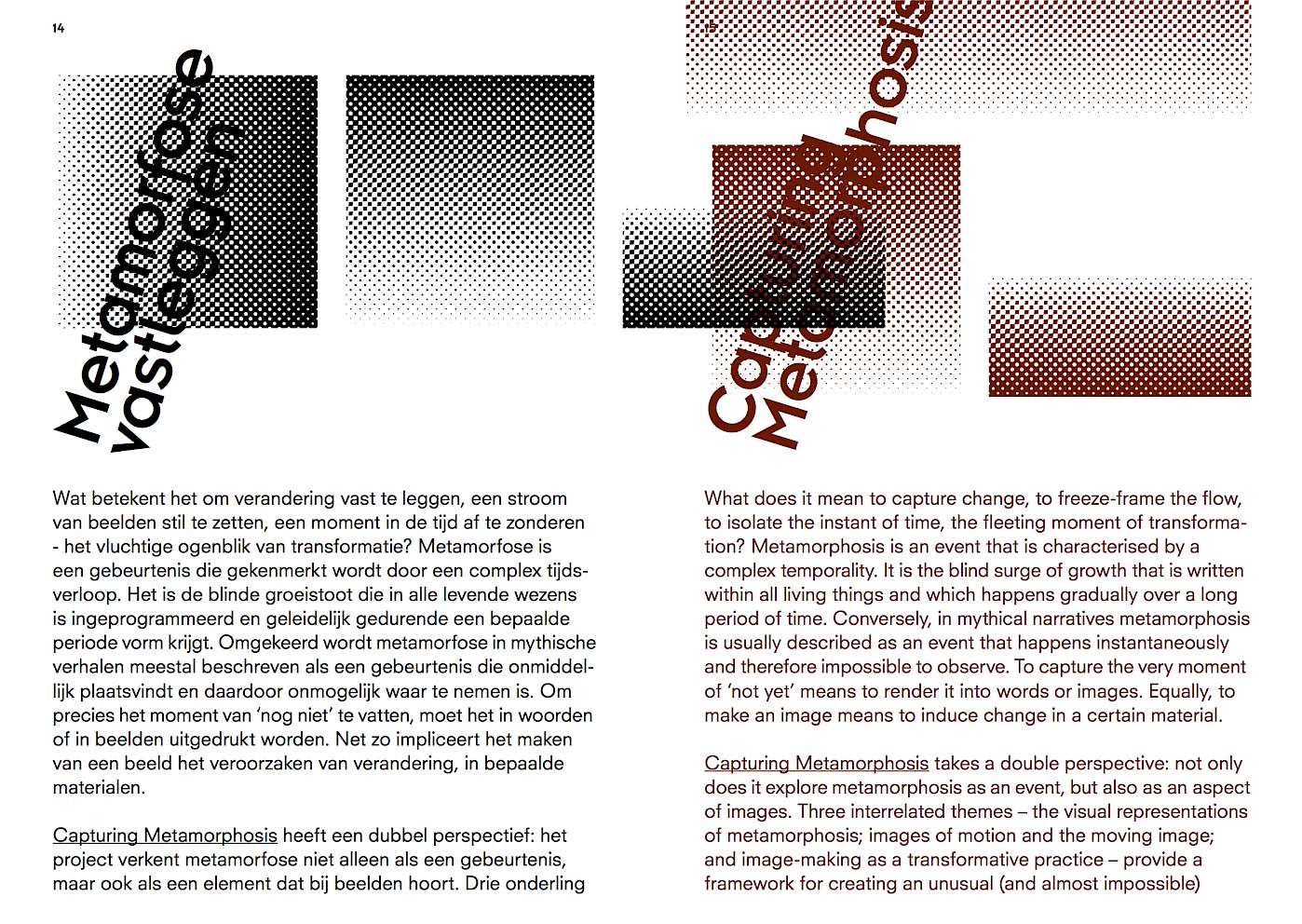 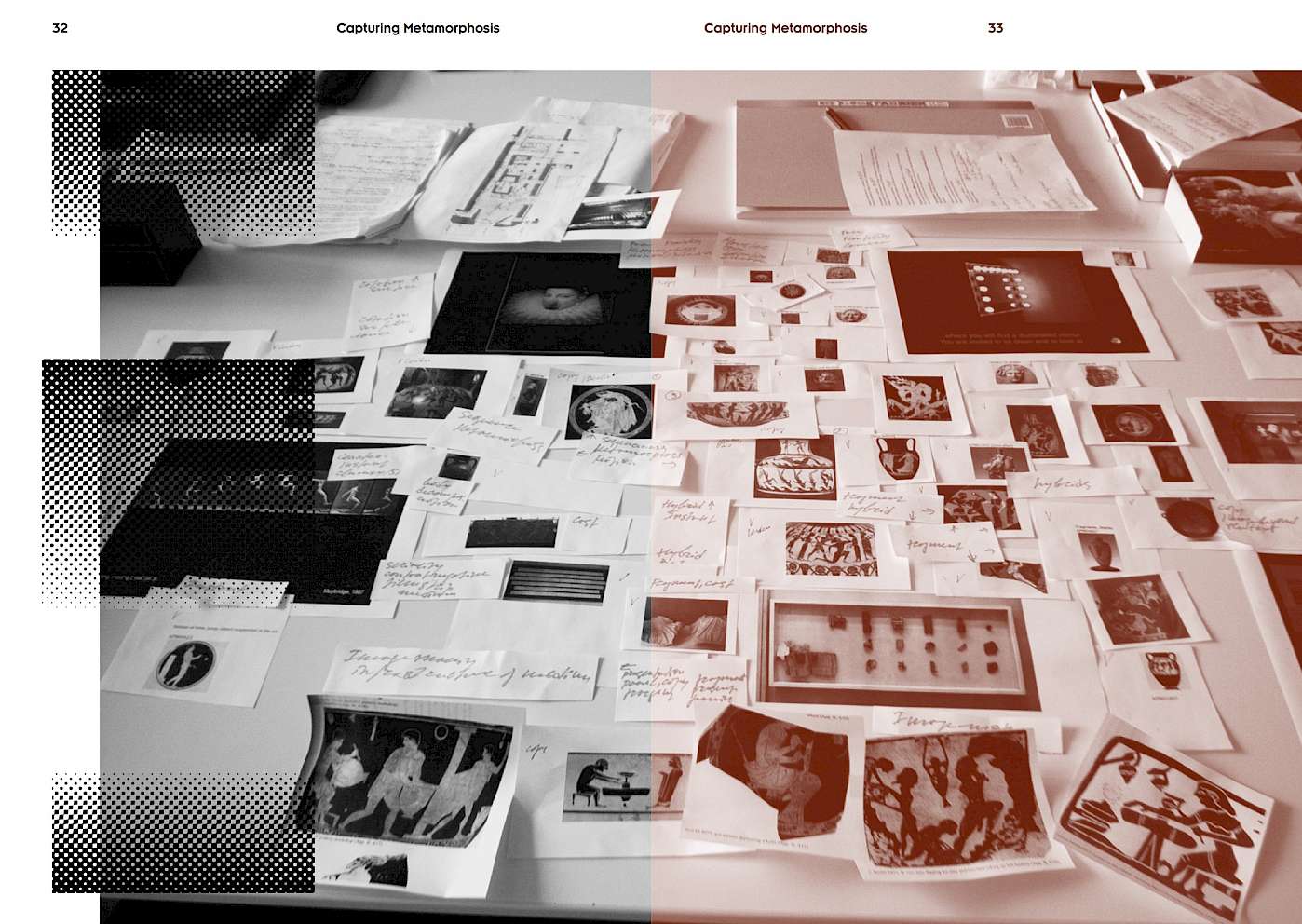 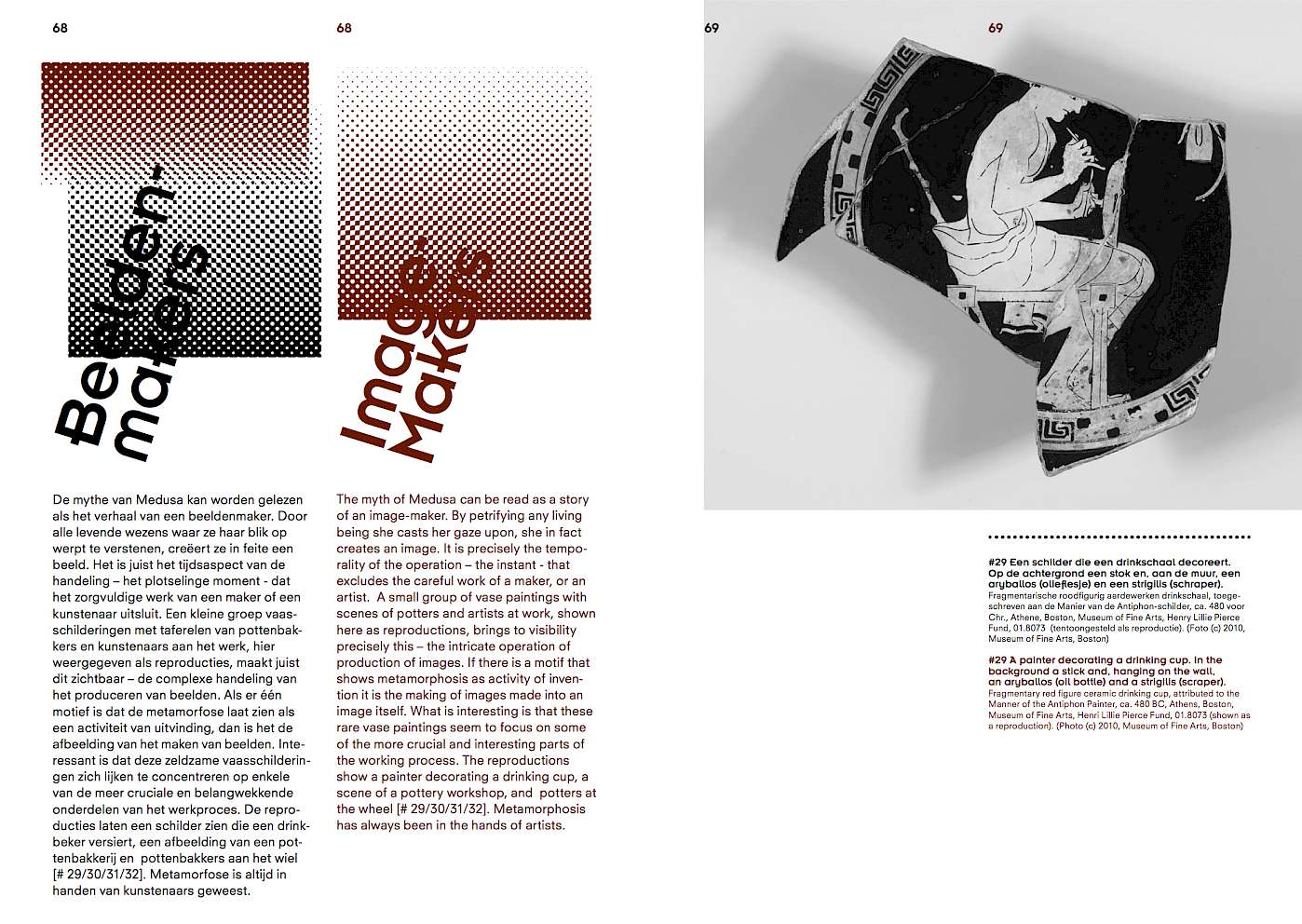 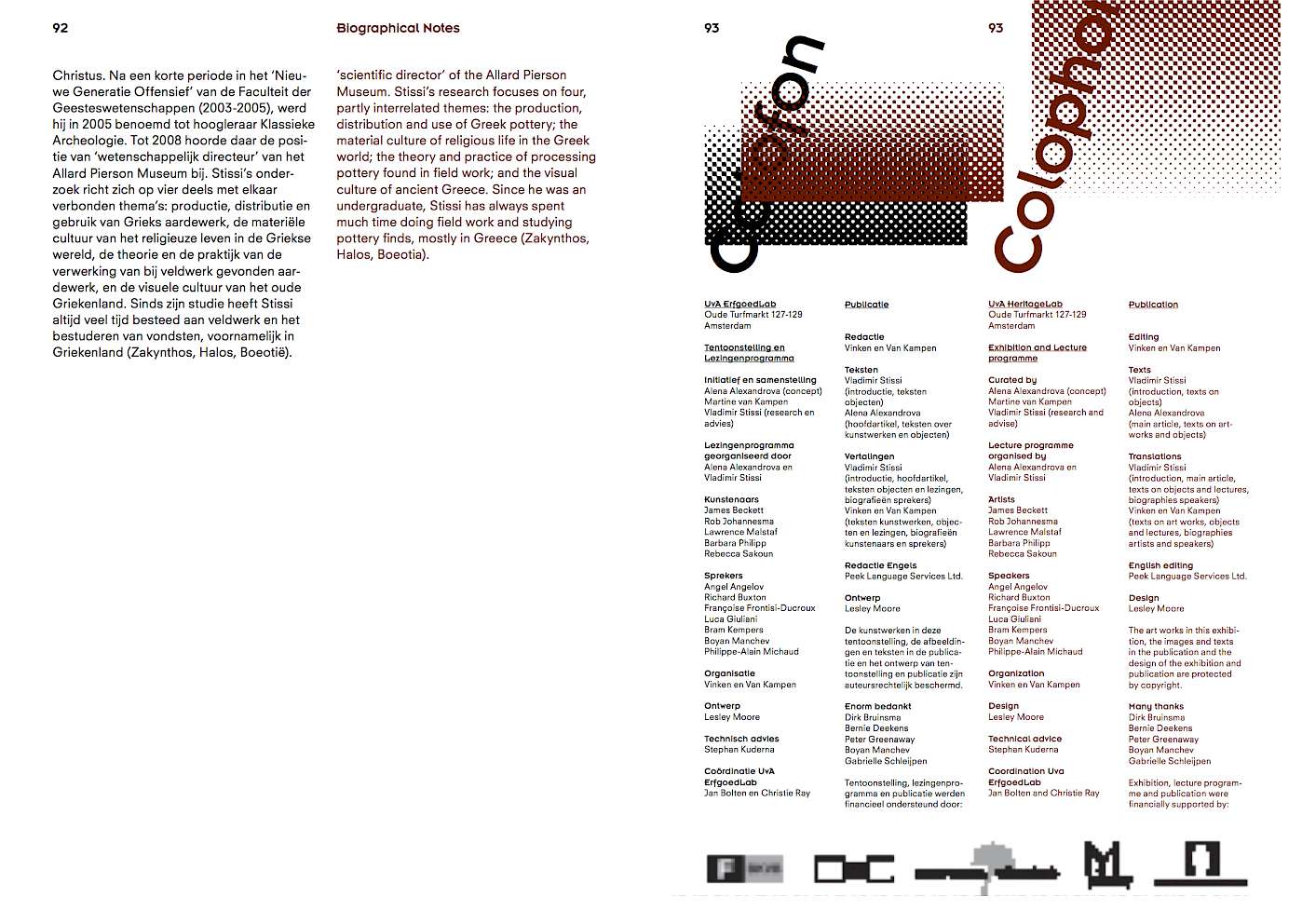 Request a free copy of the publication by e-mail.

What does it mean to capture change, to freeze-frame the flow, to isolate the instant of time, the fleeting moment of transformation? Metamorphosis is an event that is characterised by a complex temporality. It is the blind surge of growth that is written within all living things and which happens gradually over a long period of time. Conversely, in mythical narratives metamorphosis is usually described as an event that happens instantaneously and therefore impossible to observe. To capture the very moment of “not yet” means to render it into words or images. Equally, to make an image means to induce change in certain materials.

Capturing Metamorphosis takes a double perspective: not only does it explore metamorphosis as an event, but also as an aspect of images and as an artistic strategy. Three interrelated themes – the visual representations of metamorphosis; images of motion and the moving image; and image-making as a transformative practice – provide a framework for creating an unusual (and almost impossible) juxtaposition between ancient and contemporary art and media. James Beckett, Rob Johannesma, Lawrence Malstaf, Barbara Philipp and Rebecca Sakoun have created new works, taking the concept of metamorphosis and the collection of ancient Greek art held by the Allard Pierson Museum as their point of departure.

The visual motif of metamorphosis does not merely represent fantastic transformations into animals or plants, but also, more precisely, the transformability and plasticity of bodies, their ability to (re-)invent themselves constantly, and to be (re-)invented. This motif also tells another story – the story of image-making as an activity that involves the changing of forms. It is both a visual event that affects the appearance of bodies and an imaginary, fictional one; to make an image means to create a fiction. Capturing Metamorphosis takes the motif of fantastic transformations in order to read through it, to read it against its grain, to read another story – the story of how images are made, that of the medium and media. Ancient artists actually invented metamorphosis by representing it in stories and images. Present-day media claim that they can capture the minimal grains of time in which change happens. But perhaps by doing so, they invent an entirely new image, one that has never been seen before. Thus, in a sense, they too invent the instant of metamorphosis.

In Greek mythology, metamorphosis signifies a supernatural event involving a change of appearance, usually as a result of divine intervention. It is an exclusively visual motif (in the sense that vision plays a central role, seeing the changed appearance or not seeing the true nature of something) that is associated with an extraordinary variety of meanings, as is shown by Ovid’s Metamorphoses: love, identity, power and punishment. Metamorphosis is associated with the acts of procreation by the gods, or as a means of punishing humans, who are usually transformed into inferior species. In this way, metamorphosis also marks the distinction between species, human and animal, and between human and divine.

Rendering the event of transformation into an image, and representing it graphically or plastically, poses a significant challenge. Ancient Greek artists used several strategies, which can roughly be divided into several groups. First, the equivalent of comic strips, or a juxtaposition, often in one scene, of the successive stages of an event or action. This was the preferred way of depicting complex stories, even though it was not an easy one, since ancient Greek artists generally avoided showing the same character twice in a single image. In the myth, Thetis transforms herself successively into different elements and animals in an attempt to escape the tight grip of Peleus. She is represented in human form and her multiple transformations are indicated by different animals depicted next to her (Illustration 11). Second, to represent the completed metamorphosis, or the result. In this case, only the presence of other characters in the scene helps us to identify the transformed character – Zeus as a bull kidnapping Europa (Illustration 15). The third type of strategy was to represent an incomplete metamorphosis, a hybrid creature, half human and half animal – Circe and the companions of Odysseus (Illustration 10). The scene with the series of men who transform into dolphins at the very moment they fall into the sea, suggests that the artist was interested in separating the event of metamorphosis into two perspectives – one starting from the feet, and one starting at the head (Illustration 12). The strategy that would be closest to film, and shows the stages of metamorphosis by means of a series of separate scenes, was not used before the Roman period. Although, comparable series of images were used to illustrate stories composed of several separate parts like Herakles’ works. The motif of metamorphosis has a distinct presence in contemporary artworks, where it is frequently interpreted in a broader sense, beyond the mythical stories of transformation. It is almost impossible to catalogue the different approaches to this subject, as they can range from signifying concerns with form, literally the mutation of form and its studies, to an interest in a more organic type of poetics – the plasticity, the very definition of what is human – to the monstrous, to identity and its changing nature.

The task of representing the event of metamorphosis in a still image (vase painting) in fact demanded the invention of a moving image by means of a still one. We can even notice a certain proximity between the different ways of representing metamorphoses in ancient Greek art and the use of special effects in film. Furthermore, the complex construction of scenes out of different moments in a story can be compared to the use of montage strategies in film, which create ‘cinematic’ time that is by no means realistic. For more than a hundred years, the moving image has been the privileged medium for representing transformation. It were exactly these first steps in the development of the moving image that focused on studies of the stages of different types of movement, both human and animal. Edweard Muybridge’s work is probably the most well-known example of such an approach. His concerns, as well as his images, resemble the way in which ancient Greek artists represented bodies in motion, as in sport and dancing scenes. The serial alignment of bodies in these scenes indicates that the artist attempted to break down the movement, which demonstrates a particular interest in representing a chronological unfolding in a figurative space. Whether these artists were actually quite modern, or the other way around, whether modern studies of motion can be seen as imitating ancient studies of moving bodies, remains an impossible question to answer. However, it is important to consider these two directions without privileging one moment in history as a point of origin. Such nostalgia is foreign to the exhibition.

The mythical story of Medusa provides a figure of an image-maker. Her mortal gaze turns any living being into a stone-image of itself in a single instant. This is an image literally generated by confrontation. Whoever meets Medusa’s frontal gaze is transformed into an image of her- or himself. The constellation in this story has an uncanny resemblance to a type of image that is particularly modern – the photographic image. An indexical image that is produced in the instant of a single click. Or is it? A key element in this story is a fantasy which has haunted the practice of producing images throughout its history – the fantasy that there exists an image which does not involve the hand of a maker, a true image. In other words, an image that conceals the story of its creation (the ready-made; and photography has functioned in this way). Yet we all know that images are made by someone. They are highly-mediated, artificial entities, the result of metamorphoses.

The mythical story of a monster image-maker gives us an entry point to the theme of image-making itself, which is considered here as a visual motif and includes not only representations of the gesture of image-making itself, but also representations of the physical or the technical medium involved in the production of images, thereby ultimately highlighting them as visual objects, as objects that have a visibility in their own right. The frontal monstrous face of Medusa (one of the very few frontal representations of faces in vase painting) can be juxtaposed with images of artists at work – a motif present in Greek vase painting.

In contemporary art, making the infrastructure of images visible is a theme often associated with a double moment. Usually, it reveals – in or through the institutional infrastructure of the display of the image – that which is backstage. It shows who, or what, places things on display and shows the very power that produces the visibility of the artwork. This is an inherently political moment. More recently, another tendency has become increasingly apparent, namely the transformation of the technical apparatus itself into an artwork, an image, a transformation associated with a particularly contemporary moment. We are currently witnessing a process in which certain media are gradually becoming obsolete. But at the same time, precisely at such a moment, they become some sort of a rare object, to the extent of even being fetishised. And exactly at that point, they acquire a different visibility. Artists are more and more interested in integrating the technical apparatus of the photo camera or the film projector, or the LP, into their works as a visually significant element. This transformation of the apparatus into an object of observation, into an image, coincides with the ageing of media.

The space of the archaeological museum invites us to reflect on media and time. This question not only applies to ways of making images and media that are situated at a considerable historical distance. It is possible to consider ancient art in those terms. We would like to draw your attention to the medium of the vase, and to shift the focus from the myth of metamorphosis and the iconographic motif to the infrastructure that supports the image. In a sense, archaeological artefacts have always been considered images, because they are displayed in museums. However, they are situated in a space that is somewhat difficult to define, somewhere between science and art. The fragment, the shard, points to archaeology as a science that constructs, or rather has to invent, a particular visibility of the object.

This is not an exhibition about archaeology, or ancient art, or an iconography of metamorphosis. It involves re-displaying the artefact in a new light, appropriating it, enveloping it in the present moment. Neither to imitate the ancient images or artefacts, nor to illustrate them, but to research, understand and respond to some of their aspects and to contrast, to juxtapose them with contemporary media. Each of these new artworks touches upon, or rather crystallises, different moments related to metamorphosis – from the physical transformation of the object, to the formal study of fragments, to the micro-temporality of motion, to portraiture and identity, to image-making, to literally setting in motion an image from the collection. Produced for the occasion of this exhibition, they use metamorphosis as a strategy, or as a point of departure, in order to reflect on issues related to the status of the media they use.

The selection of objects and the artworks produced for this specific occasion create an open constellation that offers different possibilities for discovering connections between themes and objects. Each object from the collection of the Allard Pierson Museum is not only an object or an image, a visual object, but also a site or a place where different aspects of the motif of metamorphosis overlap. Thus, we would like to invite you to view it as a point of juncture included in a larger map of images and transformations, the borders of which can be seen as infinitely expanding and going beyond the site of the museum. It is a map that can be supplemented endlessly, able to include different images, media and temporalities. 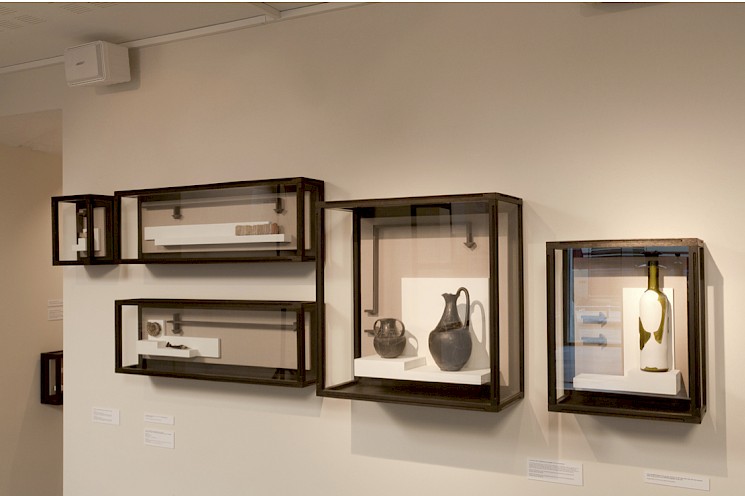 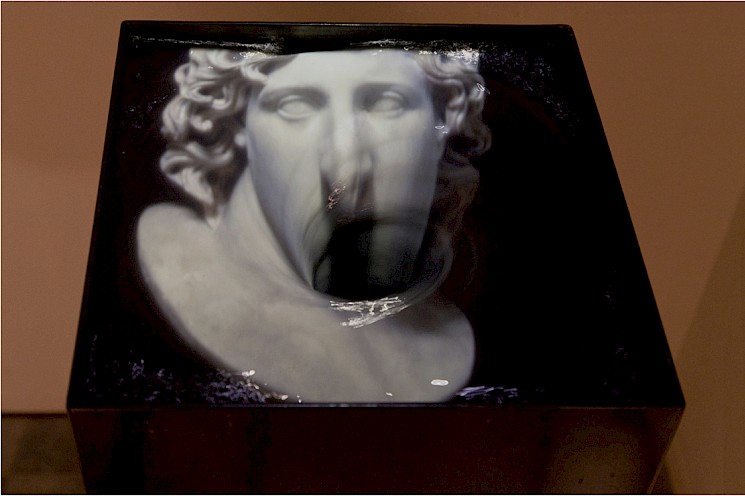 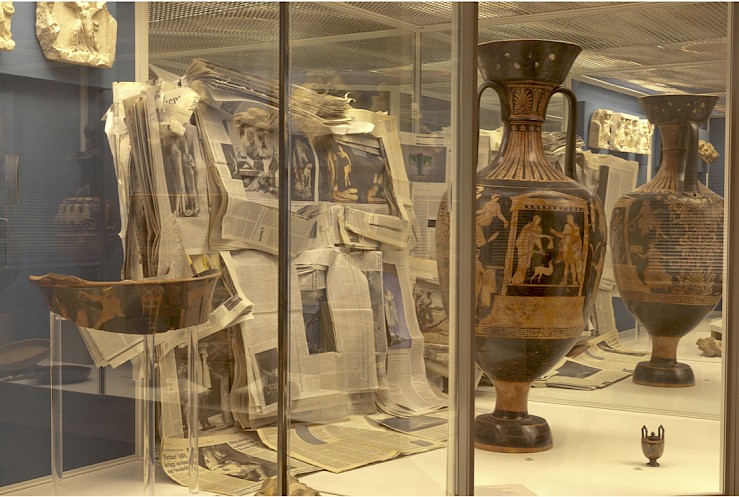